Business Forward Trump’s plan to repeal the ACA is dangerous; repealing it during a pandemic and recession could be catastrophic - Business Forward
Back to News

Trump’s plan to repeal the ACA is dangerous; repealing it during a pandemic and recession could be catastrophic

The Affordable Care Act (ACA) is best known for helping nearly 20 million uninsured Americans obtain health insurance. But what about Americans who have health insurance through work? What did the ACA mean for them? It reduced costs for small businesses, increased worker productivity and mobility, and invested in preventative care that will reduce the long-term cost of chronic conditions like diabetes and heart disease. It also made it easier for 54 million Americans with pre-existing conditions to buy insurance, switch insurance, and change jobs. The ACA’s ambitious and comprehensive approach paid off: In its first seven years (2010 to 2017), the ACA bent the cost-curve and reduced health care spending a total of $2.3 trillion. 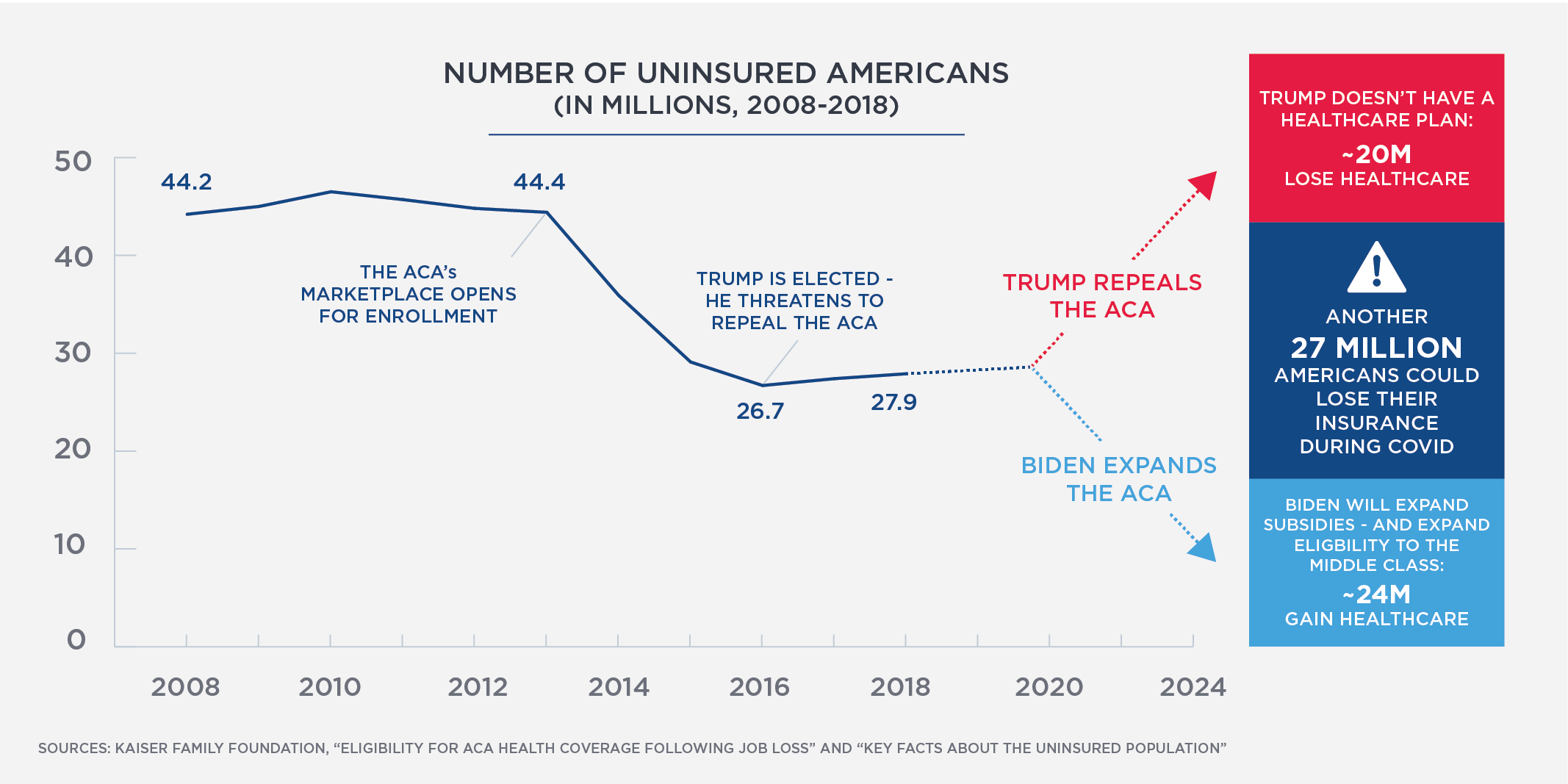 Health care is a complicated business, but the market forces capable of controlling health care costs are simple: information, competition, and incentives. The ACA put information, competition, and incentives to work by 1) covering pre-existing conditions, 2) requiring Americans to buy insurance, and 3) subsidizing the cost for lower income families struggling to pay for insurance. Health care experts call this the “three-legged stool” of health care reform. If you eliminate any of the three legs, reform “tips over.” Instead of replacing the ACA, Trump and other Republicans have attacked each leg of the stool: They have eliminated the insurance mandate, threatened subsidies, and sued to get rid of protection for pre-existing conditions.

And, next month, the Supreme Court will hear arguments on a case brought by the Trump Administration and 18 Republican AGs that could overturn the ACA altogether. Those 20 million newly insured Americans could lose their coverage — doubling America’s uninsured rate. Small business owners could see their premiums rise. The end of coverage for pre-existing conditions could leave millions of workers stuck in their current jobs (and vulnerable if he or she should lose it).

By comparison, Vice President Biden has a plan to improve upon and expand the ACA. In normal times, he would help as many 24 million more Americans obtain coverage. He would increase subsidies available for low- and middle-income workers, so they can buy their own coverage from the ACA’s marketplace. And he would expand Medicaid to provide basic coverage to America’s most vulnerable, lowest-earning workers and their families.

If these were normal times, Trump’s actions would be dangerous. During a pandemic and a recession, they could be catastrophic. The Kaiser Family Foundation estimates that 27 million additional Americans could lose their employer-sponsored health insurance as a result of COVID-related layoffs. Eight in ten of those Americans (as many as 22 million) could qualify for coverage through the ACA, but only if it’s there to cover them. If not, America’s uninsured rate could triple.