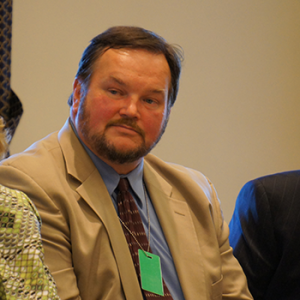 Russ Monk is the co-owner and director of operations for High Impact Technology, a manufacturer near Portland, Ore. The company designs protective technologies such as ballistic coatings for fuel tanks and critical infrastructure protection for vehicles, mostly used by the military and police forces. High Impact Technologies has exported its products to nine different countries and hoped to continue expanding overseas.

Russ first joined Business Forward in 2015, for a conference call on technology and innovation with the then-director of the U.S. Patent and Trademark Office Michelle Lee. Following the conference call, Russ expressed interest in participating in a Business Forward fly-in briefing at the White House, and attended one with senior White House and Administration officials in June of 2015. Russ later co-hosted a local briefing where he invited colleagues in his industry to discuss issues in modern trade agreements with a senior State Department official.

Russ has also taken use of Business Forward’s help working with the press. The media trainings Russ attended helped him place an op-ed in the Portland Business Journal and improve his public speaking skills.

In 2016, Russ Monk’s company won the President’s “E-Award” for excellence in exporting. They were the first company from Oregon to win the accolade in 20 years.