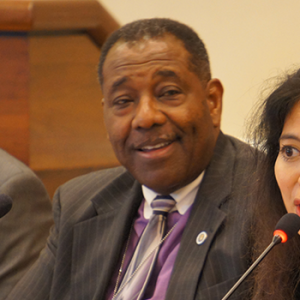 Our company doesn’t have a government affairs division, or a law firm that can keep us abreast of policy and regulatory changes coming down the pipeline, so having Business Forward bring government to us is an invaluable tool/partner.

As the founding CEO and global business diplomat of Malichi Group Worldwide based in Indianapolis, Dr. Toby Malichi advises small and medium-sized enterprises (or SME’s) as they expand internationally. Working with his clients, he sees firsthand what it takes to run a successful business and he can provide concrete examples of how the government can improve its policies and programs to better help SME’s thrive.

Dr. Malichi first attended a Business Forward conference call in 2014. He learned about the event through his work as the vice chair of the Indiana District Export Council, a local partner of Business Forward. After attending that first event, he saw the value of participating in Business Forward’s programming. “In a Business Forward briefing, real private sector leaders are able to use their time valuably, by providing input to government officials and industry experts. The format is a good return on time, since being away from the office can often lead to money lost,” he said.

Since then, Dr. Malichi regularly attends conference calls and webinars from his desk, choosing topics that will help his business, and where he can offer the best advice.

In 2015, he went to the White House to participate in a half-day briefing hosted by Business Forward and the White House Business Council. Dr. Malichi and 60 other business leaders met with senior officials from the West Wing, Treasury and Commerce departments, and the Office of the U.S. Trade Representative.

Then, when a senior administration official traveled to Indianapolis, Dr. Malichi helped organize a roundtable discussion and tour of a manufacturing facility by.

“We hosted one of the top negotiators of the Trans-Pacific Partnership and the conversation we had positively influenced how our local business community participates in a policy discourse,” he said of the event. “That would not have been possible without Business Forward.”

Dr. Malichi continues to participate in Business Forward’s programing. You can often hear him on conference calls, ending his advice with a tagline that he has popularized during more than 36 years in business: “Have a successful day and think globally!”